OK!! HERE'S UR LONG AWAITED FEATURE ABOUT THE LEARNING JOURNEY ON THE 28TH MAY AFTER THT RELATIVELY AVERAGE (lol) GP EXAM~! BROUGHT TO YOU BY UR DEAREST, BELOVED, CUTE, CHARMING, HANDSOME, COOL XINWEI ^^

ok! so the day started out with our GP exam..when i recieve paper 1..i was like WTFFFF..WHY DID THYE MAKE IT SO EASY WHEN I STUDY ALL THE DIFFICULT STUFF!! then nvm! i chose the impacts of the media one anywya..jus hope i can get a C!! next was paper 2...after reading the passage i was like =___+ WTF? EXTERNALITIES? INTERNALITIES? MARKET FAILURE? ZERO-SUM ACTIVITY? ISN'T THT WAT'S BEING STUDIED IN ECONOMICS? IS THT SETTER BIAS AGAINST ECONS STUDENTS OR WAT! but anyway..it was quite a pushover = D~~
so finally GP ended..and the start of the learning journey begin (oh before tht! I SAW HER!!!!) k back to topic..all gathered at the hall, our VP was invited to flag off the learning journey (without a flag =__+)...then..WE ARE FREE TO LEAVE..!!
This a very interesting phenomenon, just as the signal was given that classes may start moving..07S210 IMMEDIATELY SPRANG UP FROM THE FLOOR...AND START DASHING OUT OF THE SCH GATE!!!!
Record-breaking 1: Fastest class to get out of the sch gate for learning journey and made it first to burger king for lunch
Ok..so a nice lunch at burger king follow by a joyous celebration of cheryl's birthday. I coudl see the look of suprise on cheryl's face as she was like: :(thoughts in her brain) O_O, whose cake was that? OMG ITS MINE!!! THEY ACTUALLY GOT A CAKE FOR ME!!!!! I LOVE THEM ALL ARHHHHHH I AM SOOOOOO TOUCHED!!!)
Trivia about our beloved CT 1: She can really eat very fasttt!!!!! *grinz*
Ok next..got on the MRT to set off for clarke quay to Tyler Print Institude...had a nice talk with jeffrey and mrs tng on the way..
Record-breaking 2: We (or rather i) managed to achieve an impossible feat..sth that no man has ever achieved..sth tht is soooooooo groundbreaking tht it could be easily used for our PW project task 1 and get EE for it..sth equilivant to taming the wildest beast in the world... 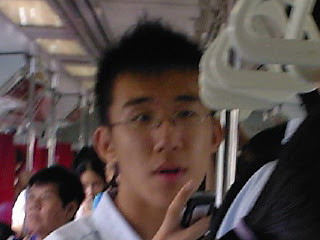 (Notice those eyes..they exude such enchanting charm...and look at tht smile...he smiles with such profound feeling...)

Trivia about our beloved CT 2: She's sooooo kind!!!!!! First, she offered her seat to a couple carrying a baby. Second, she sees a mum carrying a baby in the crowd and was soo concern!! Most caring teacher award 2007 to u Mrs Tng!!

Ok, before long..we reached Clarke Quay!!! And we climbed up this flight of torturous staircase!!!! so high!!!! (note to class: there's an escalator next to it btw)

Trivia about our beloved CT 3: She's such a fast athelete!!! I had a hard time catching up with her running up the stairs!!!!! (until the last flight when i jump to the closest steps to the rail and push myself up = X)

A YR OVER ALREADY
cbox

Layout made by BAKEDPOTATOE, with help from Karen thru PGP for the image, and fonts Violation and Adorable thru Dafont.com.